G&G came into existence in 1966 with only a couple of employees.  Today that company has grown to be one of the leaders in industrial and commercial site excavation in Kosciusko County. This is the history of G&G and how the Groninger family, by God’s grace and with the help of many committed employees and friends, helped it grow into what it is today.

The Groninger family has been playing in the dirt for generations. Tom’s Dad, Cary A. Groninger, owned a landscaping business, so Tom grew up around the dirt business. Tom was mostly interested in farming so much so that his philosophy was: “if it can’t be done from a tractor seat, it didn’t need to be done!” However, after witnessing a driveway plowed through his corn field right before harvest because a large printing company was building a new facility, his dream changed. Tom quickly realized that farming did not have much of a future and conceived the idea of starting an excavation business, which was eventually realized.

Thomas Groninger and Richard Goshert originally teamed up to found G&G Company. However, their partnership did not last because Richard had time restraints from another job. As a result, he could not invest much in the business. He was inevitably bought out by Tom who then became the sole owner.

Tom ran G&G with the help of his wife, Sandra Groninger. She used her giftedness in bookkeeping and administration to help the fledgling company operate smoothly. She was the brains of the office operation, conducting all the day to day office activities which included billing, taxes, and customer relations.  As part of her customer appreciation, Sandra would make candy and fudge. Requests for her famous sweets became a longtime tradition as customers would call to make sure they were going to get some of her delightful treats. Sandra was not just a secretary, she also cooked all the meals and made sure the office, which was simply a room in the Groninger home, was spick and span and ready to embrace customers, friends, and family. When her grandchildren arrived, Sandra became the young children’s babysitter. The fourth generation of Groningers could be spotted practicing their family craft in the sandbox just within grandma’s line of sight thanks to the giant picture window in her office.

Tom hoped that by starting this business he would be able to provide for his family; but he never expected it to take off like it did. However, by God’s grace, G&G experienced an unprecedented level of success. Tom says, “the good Lord brought a lot of business.”

One of G&G’s first customers was Creighton Brothers. Tom worked to construct building pads and driveways for their chicken and egg producing facilities. Eddie Creighton was so impressed with G&G’s work that he encouraged Tom to expand his operation to provide more services to the community. Tom decided to take on mining gravel and then later, concrete and asphalt recycling. With these additions, G&G expanded its clientele while providing more services for his existing clients.

In the early years, G&G acquired the gravel pit in Atwood, IN. G&G started out with just a Haas loader and a couple of dump trucks. Upon investing in the gravel pit in Warsaw, G&G invested in a crusher to make processed gravel and later recycled concrete. The move into recycled materials was a significant milestone for the company because G&G was one of the first in the state to recycle these kinds of material. Tom set up shop near their pit in Warsaw, Indiana and their headquarters still stands there today.

Tom began preparing his sons to be part of the business from a young age. Cary, named after Tom’s father, started following his dad around when he was old enough to walk. By the time he was only 11 years old, Cary was operating an excavator and helping his dad on G&G jobsites. He fondly remembers his first job doing clearing work for a local farmer. After this experience, he was hooked; Cary was sure he wanted to work in his family’s business.

About 25 years ago, Tom passed down the ownership of the company to his sons, Cary and Rich. With their hard work, and God’s grace, G&G continued to do phenomenally well. Tom and Sandra’s investment in their children prepared Cary and Rich well for owning and operating the family business. They stressed the importance of caring for the community to their children at a young age. If someone asked for their help, Tom and Sandy would drop everything to help that person. Cary and Rich want to continue this legacy by continuing to do a lot of work within the community. Over the past couple of years, G&G has partnered with Habitat for Humanity and the Kosciusko County Fair, Operation Finally Home, Warsaw’s First Friday among others.  They have also completed countless projects for local churches.

In 1995, Cary and Rich made the executive decision to build a new shop to acquire more space and to be closer to all the stockpiles of recycled materials. The move was a significant step for the two young brothers since the shop had been located right next door to Tom and Sandra’s house for almost 25 years. But ultimately, the brothers felt that their swiftly growing company needed a new place to call home. On a Saturday morning, their children could be seen doing some hands-on learning, aka playing in the dirt piles with small versions of the giant machines moving around them, out front of the shop.

The leadership of Cary and Rich was tested in 2006 when they started work for Louis Dreyfus Company (LDC). LDC is a company that collects soybeans from all over the Midwest to convert into biodiesel. This job was a stretch for the small businesses owners and all their employees. The job was massive in scale, and they were moving so much soil that it was hard to see short term progress. The LDC job proved to be one of G&G’s most difficult jobs due to the amount of unforeseen problems. For example, a lot of the existing soils were so unacceptable that G&G had to cut the soils for the building pads by almost 27 feet. However, after two hard years, G&G completed the biggest project in its history.

In 2008, the company’s development took another big step when the central office moved from Tom and Sandra’s home residence into the town of Warsaw. The G&G central office had existed in Cary and Rich’s childhood home for over 40 years but space was becoming an issue. When the business started, Sandra was the only office worker, but by the time of the move, G&G had four full time office people and very little space for them. Now, in 2020, the full-time office staff has expanded to nine office employees. 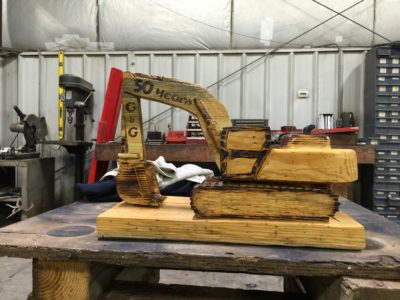 Through the hard work of the Groninger family and the strong relationships they have formed with their employees and community, G&G grew into what it is today. Today G&G Hauling and Excavating has almost 50 employees and over 110 pieces of heavy machinery and trucks. The Groninger family is extremely proud of G&G and grateful for the loyal customers that the company has had locally. These vital relationships with their clients are what will propel G&G to even greater heights in the future. This company continues to provide innovative solutions and quality services for their existing customers, and those that they have yet to serve.